CORONAVIRUS UPDATE: Click Here to Learn What We Are Doing to Protect Our Clients

How does this picture look to you?  Pretty scary, huh?  Well, you’d be surprised how often I see these types of Massachusetts motor vehicle accidents, caused by distracted driving.  That’s code for “Using a smart phone when behind the wheel.” 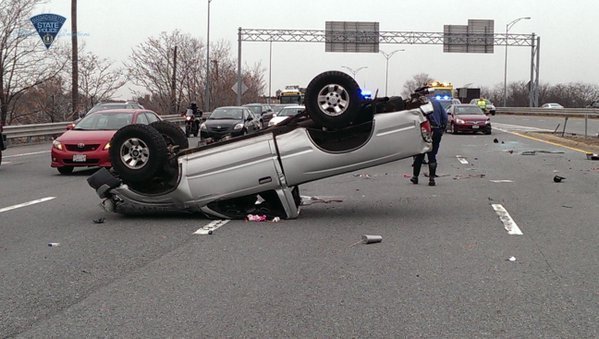 Despite the gravity of this problem, some would say that this subject is a classic battle between civil libertarians vs. law-and-order types.  I prefer to call it Realists vs. Members of the Flat Earth Society.

Because, as a Massachusetts car accident attorney, it’s my opinion that one would have to believe the earth is flat, to conclude that the time is long past due to ban the use of all hand-held devices while driving any motor vehicle.  An anemic attempt to address this massive problem was enacted in 2010, banning drivers aged 16 and 17 from using the devices while driving – but not adults.   The assertion at that time that this was “really a youth problem” was pathetic, and driven largely by special interest groups that didn’t want to interfere with “adult use” of these accident-causing devices.  Predictably, that embarrassing excuse of an effective public safety statute did little to stem this deadly, and growing, problem.

Just about ten days ago, at the end of June, the Massachusetts Senate passed a bill that would extend the ban on using hand-held devices to all drivers.  Completely.  This is legislation long past due.  The widespread use of cell phones has been in use since the mid to late 1990’s.  As cell phones evolved into smart phones, the problem only got worse.  Just how bad is this problem? According to the National Highway Traffic Safety Administration, almost 3,500 people were killed across the U.S. in 2015, the most recent year for which statistics are available.  Importantly, that figure doesn’t begin to count the number of injuries, alone, caused by distracted driving – many of them severe and permanent, such as horrific burn injuries, permanent brain injuries and paralysis.  What makes all of this so awful is that it’s entirely preventable – caused by a lack of basic consideration for others and a shameful lack of self-discipline.

The key part of the Senate’s current version of this much-needed bill is the steep fines it imposes: $100 for the first offense, $250 for the second offense and $500 for third or subsequent offenses.   And as with speeding and other civil (as well as criminal) motor vehicle offenses, auto insurance companies would also be allowed to surcharge the policies of offending drivers.  The proposed bill would allow a driver to use the device only for “one tap or swipe” while behind the wheel, so that a driver can set a phone to hands-free mode.  That’s all. Drivers would be required to pull over in order to either hold or use a phone in any other way, and they must be completely off a public way when doing so.  Additionally banned would be the following:

This is a vast improvement on the 2010 bill that became law, and I’ll discuss why in my next post on this subject in a few days from now.  Until then:  Put that phone down when you’re behind the wheel – and that means not answering it if a call, text, email, or anything else comes in.   The life you save could be your own.

No Fee Until We Win Your Case
Free Phone Consultation 781-320-0062·617-285-3600 We Make Home & Hospital Visits
"You know what impressed me most about you? I know that my injuries from my car accident weren't the worst that you had in front of you - my case was far from the biggest case in your office - but you represented me like my case was worth a million dollars. I can't thank you enough."- Margaret G., client
Topics

Search
Want to Win Your Case? Then The Choice is
Kickham or Lose
Kickham Injury Video Library